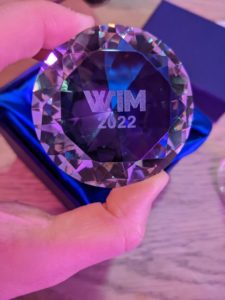 South Wales based entrepreneur, Katie Bullon, has been recognised as the Best Leader in Marketing: Agency at the Women in Marketing Global Awards 2022.

activ was established in 2008 as a digital marketing franchise, of which, Bullon became a franchisee in 2014, later becoming franchisor in 2020 and expanding the group into three separate business entities with a major rebrand through one of the most difficult economic climates the world has seen.

Launched in 2010, the WiM Awards were established to recognise the economic, social influence and impact of women to millions. The WiM Awards has given recognition to inspirational women and male equality advocates across the globe, from some of the biggest brands, including Google, HP, Unilever, Burberry, SAP and Live Nation.

Bullon said of her award win: “I am totally gobsmacked to have received this Best Leader award. To be recognised among some of the world’s top brands and businesses is truly humbling and I feel honoured. I was disappointed not to have been able to attend the awards in person and continue to be inspired by all of the shortlisted candidates. Thank you for the recognition and well done to everyone; let’s build on this!”

Barber said of her commendation: “What an inspirational evening! The commendation means so much to me alongside women with astounding achievements. Thank you.”

WiM had also shortlisted a new team member at activ, only seven months into her role as Marketing Executive, Kathleen Taylor-John as One to Watch.

You can find out more about the Women in Marketing Awards, along with all of the award winners, here.