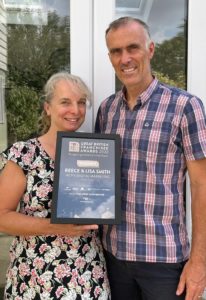 Dunmow based digital marketing experts Lisa and Reece Smith have joined the elite of the franchising world after landing a major industry award.

The award recognises excellence in franchising by considering a number of business factors including business stability, experience, driving business growth, staff retention, customer satisfaction, involvement in the local community, leadership practices and involvement within their franchise network. Which Franchise considered the pair, worthy winners in all aspects.

With experience of a previous graphic design business under their belt, the Smith couple chose to stand on giants’ shoulders, buy a franchise, and follow the proven business methods of a successful network marketing agency, activ Digital Marketing.

“We were profitable within the first 12 months,” says Lisa, “and since taking on the franchise we’ve expanded by taking on more territories by postcode.”

Their dedication and ambition has not gone unnoticed by the network, as well as by the awards judges. “These franchisees have been recognised for outstanding business performance. Judged against rigorous criteria including growth, customer satisfaction and community involvement, they also demonstrated impressive leadership and resilience through the pandemic.” Suzanne Melville, Which Franchise.

“It’s very rare to find a couple who are equally passionate about supporting their local business network with their short- or long-term marketing goals,” says Glenda Barber, the activ network’s Head of Marketing. “They both work tirelessly and go above and beyond.”

Of the award win, Lisa said “Oh my gosh we’re so proud, what a fantastic honour. We love being part of activ Marketing Group and it’s their support that makes us successful.”

The Great British Franchisee Awards are run by Which Franchise, supported by Lloyds Bank, BDO, AMO Consulting and Chantry Group.